Work on this sculptural ensemble in the centre of the gardens in Plaza de Oriente began in the seventeenth century. It is dedicated to King Philip IV and the main statue, in bronze, represents the king on horseback, in a difficult composition which is the work of Italian sculptor Pietro Tacca.

He based it on a design by VelÃ¡zquez and Galileo Galilei acted as scientific advisor to ensure the stability of the statue. This was no simple matter, as it was the first equestrian statue in the world supported on the back legs of a horse (the tail provides inconspicuous additional support). This design was chosen because Philip IV wanted a sculpture that was better than that of his father Philip III in Plaza Mayor. It was thus decided that a statue should be created featuring a horse on its hind legs, something that had never been achieved before.

The statue stood in various sites until 1843, during the reign of Isabella II, when it was transferred from the Retiro park to its present location, as recorded on the two marble plaques on the pedestal. It was then that the two bas-relief panels were added at the base of the statue. One shows Philip IV presenting the Cross of Santiago to VelÃ¡zquez and the other is an allegorical reference to the monarch's role as a patron of the arts. The ensemble also includes two large shell-shaped fountains, a figure that depicts a river, and four bronze lions. 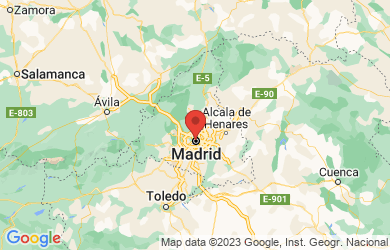 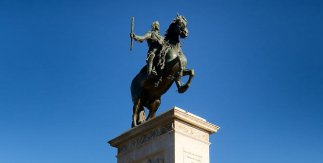 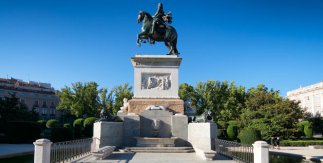