These four skyscrapers constitute a business complex built on the grounds of the old Real Madrid sports complex. The four towers are the Foster Tower, the PWC Tower, Torre Cristal and Torre Espacio. Next to them, a fifth building, Caleido, is rising up and will be inaugurated in 2021.

These skyscrapers accommodate mostly offices, but there are also services such as a hotel and a garden. Furthermore, each tower has several underground levels for parking and road access. The construction of these four buildings began in 2004 and work was completed in 2008. Over 820 feet high, the Foster Tower is the tallest of the complex, and in Spain as well. It was designed by Norman Foster. The floors are organized in the same manner as a bookcase.

Argentinean architect CÃ©sar Pelli is the author of the Torre Cristal project, which is 816 feet tall. Its highest point is intended to house a garden. La Torre PwC  is a 52-storey skyscraper that is 236 m tall. This building, designed by Carlos Rubio Carvajal and Enrique Ãlvarez-Sala Walter, is the only one of the four that was built by Spanish architects. It houses a 5-star luxury hotel, the Eurostars Madrid Tower, which occupies up to the 31st floor and has a two-story dining room with panoramic views of the city. With more than fifty floors, Torre Espacio stands 731 feet-tall. 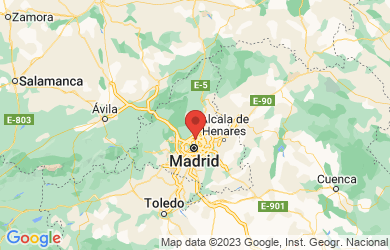 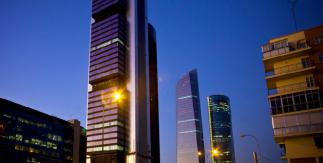