Real Madrid is one of our city’s three professional football teams, together with AtlÃ©tico de Madrid and Rayo Vallecano. Holder of multiple European and international titles, the club opens its doors 363 days a year for football and sports fans to explore its historic stadium, an absolute must on your trip to Madrid.

Named after the club’s legendary president who headed Real Madrid between 1943 and 1978, the Santiago BernabÃ©u stadium was opened in 1947. It has a capacity for 81,044 spectators and boasts 245 VIP boxes and four restaurants (La Esquina, Puerta 57, Real CafÃ© BernabÃ©u and Zen Market, all of them closed during matches).

On 11 June Santiago BernabÃ©u Tour will reopen to the public, at a third of capacity and with strict hygiene measures in place.

Due to the works being currently carried out in the stadium, the tour is restricted to the following areas: panoramic view of the stadium, the "The Best Club in History" room, the "Sensations" room and video and photomontages with the players.

For health and safety reasons services such as audioguides, official Real Madrid tours, group visits and school trips are currently not available.

The BernabÃ©u Tour takes visitors around the club’s most iconic spots and shows them the stadium the way the authorities see it, from the Presidential Balcony; from the players' perspective, from the pitch itself, and from the coach’s viewpoint, sitting in the heated ergonomic seats in the bench area. The tour route includes the players’ dressing rooms where few can resist having their photo taken next to their favourite player’s locker.

The BernabÃ©u Tour explores the history of Real Madrid in the Trophies Exhibition, which houses the club’s trophy collection plus thousands of items that are part of its heritage, including shirts, balls, photographs and documents. In addition to the huge exhibition of paraphernalia, there are interactive screens showing fascinating audio-visual content like the ones in "The Best Club in History" room and in the "Sensaciones del Real Madrid" room, an exciting way of bringing the team’s history alive.

Buy tickets for the BernabÃ©u Tour

Redevelopment of the BernabÃ©u: a stadium for the 22nd century

The New Santiago BernabÃ©u project, work of the GMP-L35-Ribas group of architects,  includes the construction of a large cornice at the main entrance, which will fly over the square without any ground support, forming a  large 2,000 square metre entrance atrium, which will lead the way to the new BernabÃ©u.

Among other important aspects of the redevelopment of the stadium (which is expected to be terminated in mid-2021) is the construction of a new stand on the east side, which will be slightly higher than the current one, although the final capacity will remain at 80,242 seats (one less than at present). The construction of a retractable roof will enable the pitch to be used regardless of the weather and will also reduce the acoustic impact for neighbours. 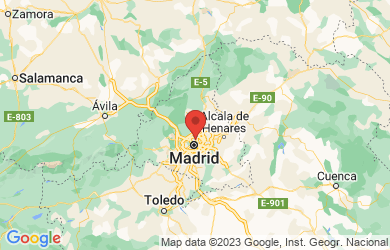 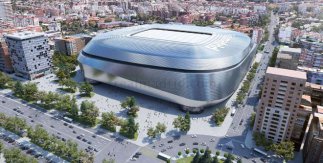 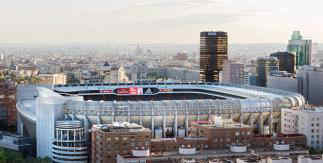 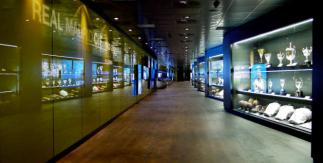