Madrid's cathedral, which stands in Hapsburg Madrid, has a short but tortuous history. The first plans for the church were drawn up in 1879 by Francisco de Cubas, who wanted to create a pantheon for the late Queen Maria de la Mercedes. The foundation stone was laid in 1883, but when Pope Leo XIII granted a bull in 1885 for the creation of the Madrid-AlcalÃ¡ bishopric, the plans for the church were changed to become plans for a cathedral.

Cubas began a new project, more ambitious than the previous one, this time inspired by the French 18th century Gothic, adding elements from the cathedrals of Reims, Chartres, and LeÃ³n. The project, which was the first to include a large Romanesque crypt, served as the basis for the final construction. The Cathedral was conceived as a votive temple erected by the people, but the donations were insufficient and there were many delays in carrying out the work. In 1899, the Marquis of Cubas died and Miguel OlabarrÃ­a, Enrique Maria RepullÃ©s, and Juan Moya were subsequently put in charge of the project.

The crypt was opened in 1911 but work was suspended during the Civil War and resumed with limited resources in 1939. After this, aesthetic criteria changed, and a Gothic cathedral was no longer considered suitable because of the contrast with its surroundings. In 1944, the Directorate General for Fine Arts announced a national contest to find a new architectural solution; Fernando Chueca Goitia and Carlos Sidro were the winners. In 1950 work was restarted, the cloister being finished in 1955 and the main faÃ§ade in 1960. The cathedral was considered completed in 1993. On June 15th, 1993, it was consecrated by Pope John Paul II on his fourth trip to Spain.

It also has a museum that houses effigies of the city’s patron saints: the Virgin Mary of la Almudena and San Isidro Labrador, and has an exhibition of the life of the Church through the seven sacraments. 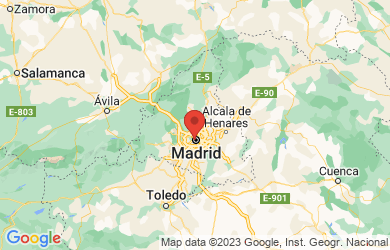 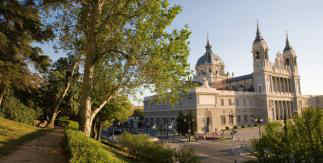